When most people use shipping companies, they assume that their next day or two day package is rushed to the airport immediately to hop onto the next flight. Only a small percent of packages actually make it onto an airplane. A smaller amount gets to board a passenger carrying plane. The hundreds and thousands of tons of cargo that is shipped from coast to coast every day, only about 50,000 tons is classified as air cargo. And of that amount, about one quarter is shipped via domestic passenger air carriers.

The Transportation Security Administration (TSA) is responsible for ensuring the security of all modes of transportation, including cargo placed aboard airplanes and particularly focuses on passenger carrying planes.

TSA worked closely with Congress for more than six months to significantly strengthen security in air cargo through the 9/11 Bill, which was signed into law on August 3rd. TSA will meet the mandates of the law and will screen 50 percent of air cargo on passenger carrying aircraft within 18 months and 100 percent within three years. 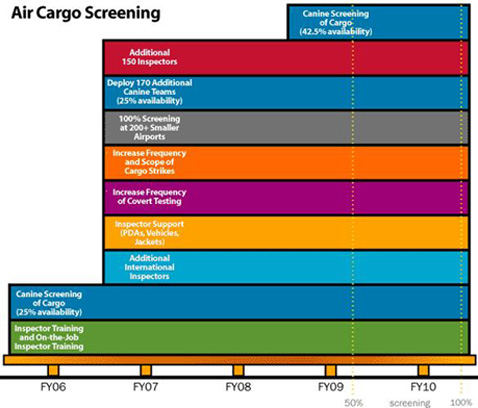 With TSA's new air cargo regulation, TSA will be doing 100,000 more background checks, specifically on cargo employees who screen cargo and/or have knowledge of how it is going to be transported or actually transport the cargo. The rule requires more robust checks and more visibility on the shipping companies and their employees. Additionally, we have extended security areas at the airport to include air cargo areas. 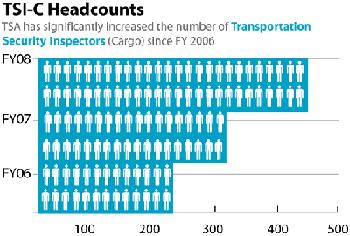 To ensure a high level of compliance with our regulations, TSA employs 300 Cargo Transportation Security Inspectors (TSIs), who are exclusively dedicated to the oversight of air cargo. An additional 150 air cargo TSIs will be added by the end of FY08, each having undergone behavior observation training to spot anything suspicious while they're completing their regulatory duties. Inspectors conducted more than 30,000 compliance reviews in FY06 and initiated more than 1,300 formal investigations based on suspected non-compliance with TSA. Several companies' privileges to use passenger-carrying aircraft for cargo have been suspended for not adhering to our regulations.

Welcome to MoveTransport.com! You can locate all your auto shipping and car transport needs with us, as we are the premier auto transport company specialize in not only offering guaranteed services, but also well-known for the reliable price offered. Whether you are looking for car shipping, auto transport or any other kind of vehicle transport, you will not find a better alternative then All America auto transport! Don't forget to bookmark our site in case you wish to come back!